Do you have a five-dollar bill? If you do, have you taken a close look at the design of the bill? If you take a closer look, you’ll notice a large tree in the background of the bill but have you wondered what that tree was?

Well, you might’ve guessed based on the title of this post that it is the Tembusu tree!

The Tembusu tree (Fragraea fragrans) is an evergreen tree from the family Gentianaceae that can be found in Singapore. In fact, the Tembusu tree featured in the five-dollar bill is found at Botanic Gardens, where it is deemed by NParks as a Heritage Tree.

Fragraea frangans. Its name resembles the word ‘Fragrance” doesn’t it? Well, that’s because frangans means fragrance in Latin and the Tembusu tree’s name arose from the sweet smell that its flowers give off.

The most distinctive feature about the Tembusu tree is its deeply fissured bark. When I was first introduced to the Tembusu tree, the guides even told me that the Tembusu tree looks “out of place” in Singapore because of its thick bark that resembles insulation (which is odd for a tree native to South East Asia, where temperatures are almost hot all year round).

The Tembusu tree’s flowers start out white and mature into a yellow hue and give off a strong, sweet scent during the morning and evenings. Its fruits, when ripe, are round berries that are contain lots of seeds which provide food for many different species.

The wood of the Tembusu tree is hard and durable, making it commonly used for building houses, bridges, rafters and chopping boards amongst other things in the past. That being said, perhaps let’s spare the 150-year-old Tembusu tree in Botanic Gardens, shall we?

What is it: Huh? Colugo? Simi lai eh?? (translation: what on earth is that?). Well, given its elusive nature and well camouflaged body, it is not surprising that these creatures are not commonly spotted by visitors to our nature parks. Colugos are arboreal (meaning tree dwelling) gliding creatures belonging to the order dermoptera and family cynocephalidae, of which there are 2 extant and 2 extinct species [1]. The species we have in Singapore is the Malayan Colugo or, if you are feeling particularly intellectual, you can tell your friends that you have seen a Galeopterus variegates!

How does it look like: Given that a picture  paints a thousand words, let’s look at a picture of one. We can see that the Malayan colugo has fur that is mottled grey (2) or brown that is sometimes tinged with green. It is this abstract pattern that allows it to blend in so well with the canopy, making it difficult to spot.

Additionally, it has two large, forward facing eyes bestowing it with fantastic binocular vision [1]. This could be what allows it to judge distances accurately when gliding from tree to tree. Complete with its small cupped ears, its face is certainly one that is very cute indeed! However, its party trick are its huge membranes (scientifically known as patagium) that  extend from limb to limb, even in between its digits in order to give it as large a surface area as possible [1]. Just like Batman’s cape, these membranes allow it to glide amongst the canopy, hence giving rise to its other common name, which is the flying lemur. Here’s a picture of its pretty insane looking patagium in action! 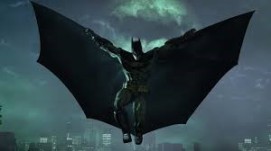 What does it eat: The diet of the Malayan Colugo consists mainly of leaves, flowers and young shoots along with some insects [3]. It even consumes durian flowers which might not seem like good news for those durian lovers out there! However, it also performs crucial ecological functions such as seed dispersal [1] so it’s a pretty important member of the forest as well!

Where can you find it: The Malayan Colugo is mainly found in nature reserves such as the Central Catchment Nature Reserve (CCNR) as well as Bukit Timah Nature Reserve (BTNR). Outside of nature reserves, parks such as Bukit Batok park also harbour some populations [4]. I have also personally seen a few at Hindhede nature park (which is next to the BTNR) as well as on trees growing next to the golf courses of the Singapore Island Country Club.

Other interesting trivia: Did you know that the Malayan Colugo can glide up to 100m [3] while losing only 10m in elevation? Also, having lived in trees all its life, you might think that the colugo would be an adept climber but it is far from it! It uses a clumsy hopping motion [3] to move up and down trees which is not exactly the most elegant method of locomotion. Lastly, the colugo rarely ever ventures to the ground, not even to defecate! Here’s a picture of it defecating from a tree!

As you can see, it has to lift its tail and wrap the membrane over its body just to take a poop. Looks really weird doesn’t it! Attached below is a fascinating video on how the colugo hops up trees and glides. Enjoy!

Well, that’s all from me today. I hope that this post has given you folks a better understanding of the colugo, which is just one of the many interesting creatures inhabiting our forests. Until next time!

The wind grew stronger as the dark clouds loomed. The meeting point was crowded with people from the approaching rain. Even the resident long-tailed macaques were indoors to seek shelter. It was a quarter to nine when our guides started to worry. Will the trail carry on or will it be cancelled? Just as the clock struck nine, the clouds started to part and the sun shone brightly on MacRitchie Reservoir Park. It was time to commence the trail!

Our five nature guides and six participants made their way to the start of Petai Trail for the Bachelor of Environmental Studies (BES) Drongos guided walk. As they began, the team spotted the native red jungle fowl from its distinctive call. Who would have known that such a brightly-coloured and loud animal could be found in our forests?

As our guides shared about the history of Macritchie Reservoir Park as a plantation and a kampong¸ they pointed out distinctive plants that have remained through the ages. They included the tall and majestic chewing gum tree (also known as the Jelutong), and the twirling rattan tree.

The trail was filled with the sights and sounds of many of Singapore’s native wildlife. Thanks to our nature guides, our team was able to spot and identify a wide diversity of animals such as the pin striped-tit babbler, long-tailed macaques and common sun skink. 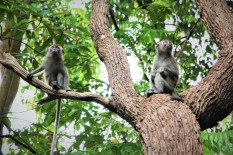 As the trail came to an end, the group was greeted by a cool breeze along the reservoir. It had been an exciting and informative trail, with both the participants and nature guides learning more about Macritchie Reservoir Park from each other.

If you are interested to learn more about the wildlife in Macritchie, then join us for a free guided walk at Petai Trail by signing up here. Our friendly nature guides would love to take you on a trail you will not forget!

It’s just been slightly more than two months into 2017 but we’ve had so much going on! Three walks have already been concluded, and we’ve also had a booth at the Biodiversity Roadshow in NUS. But apart from all the guiding action, BES Drongos has also undergone several revamps!

Our flock has expanded!

As with every new semester, BES Drongos has recruited new members to join our flock. This time, we have a record addition of 15 new Dronglets into our BES Drongos family!

Our new guides have been all trained up, and are ready to put up a good show for you. Do join us in our remaining walks to catch both them and our more senior guides in action!

Besides guides, we have also formed up a new writing team and photography team to bring you more insights into our biodiversity and all the action happening at our walks, so stay tuned!

Just like ecological succession in our forests, change in leadership is also a natural progression for us here at BES Drongos. With committee handovers completed, a new team is born! We have a diverse team comprised of Drongos from Year 1 all the way to Year 3, and we sure hope this diversity will give BES Drongos a breath of fresh air!

With new blood and a new team, we are definitely stoked for what’s ahead, and we hope you are too!

Cock-a-doodle-doo~ The year of the rooster is here! In certain parts of Singapore, you can still see the ancestors of the domesticated chicken, which are the Red Junglefowls! For those who have joined us on our walks, you might recall seeing or hearing this bird near the start of our trail. And yes, it is a bird, that CAN fly! Many people think that they can’t fly, but when the Red Junglefowls are disturbed, they can very well fly. They even roosts in the tree.

While the numbers of the Red Junglefowl (Gallus gallus) may appear to be on the rise in Singapore, not every ‘chicken’ that you see may be it! Many are the domestic chicken (Gallus gallus domesticus); some are hybrids. The Red Junglefowl is the wild ancestor of the domestic chicken, and can be distinguished by its white ear patches, white rump patch and grey legs. While its call may initially sound like the familiar ‘cock-a-doodle-doo’, listen carefully, and you will realise that it actually ends abruptly (versus the trailing end note of the domestic chicken)! It is believed that the Red Junglefowls on Pulau Ubin are of pure stock, and while individuals (probably) do occur on the mainland together with their domestic counterparts, it is difficult to tell for sure as hybrids can look very similar. One thing’s for certain though, the Year of the Rooster is upon us, and we’d like to wish all a Happy Lunar New Year (else happy holidays)!