Personally, I’m an omnivore and my only concern for food is how good it tastes. Although I have always heard about how environmentally damaging eating meat is, I never put much thought into the situation. This led me to picking up this topic to learn more about the nitty gritty of meat production. It turns out the problem was worse than I expected. My steak probably didn’t come from a cow who frolicked in the clovers. It was probably confined in small cages and rested on a cold, hard cement floor. Similarly, my chicken was probably confined into small cages known as battery cages.

Such is the reality for the meat we eat. In fact, the majority of meat we eat comes from animals bred and confined in a place called an AFO (Animal Feeding Operation) (Worldwatch Institute, n.d.). According to American standards, AFOs are facilities where animals are confined and fed for at least 45 days in any 12-month period, and their feed is delivered from outside to the mouths of the animals (EPA, n.d.). AFO’s elder brother, Concentrated AFO (CAFO), has an additional criterion of having at least 450,000 kg worth of livestock in it (USDA, n.d.). 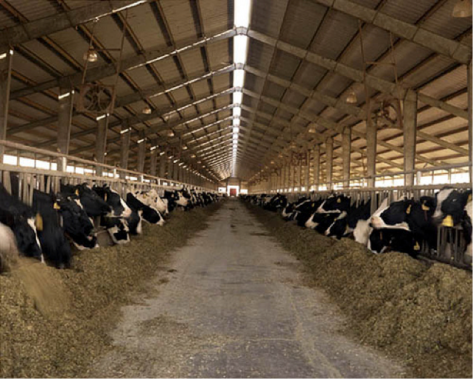 As they say, a picture speaks a thousand words… or cows

Squeezing so many animals into tight conditions is not only unethical, but also poses serious environmental problems. At such high densities, the resulting quantities of manure (aka poop) can range from 3 to 20 times that of human waste produced in America (Hribar, 2010). In addition, CAFO owners typically add monstrous amounts of water to the manure before placing them in a pool. In this manure lagoon, bacteria guzzle on the nutritious meal and generate huge amounts of gas; greenhouse gases like methane and nitrous oxides as well as foul smelling ones like hydrogen sulfide (with a rotten egg smell) and other Volatile Fatty Acids (with a manure smell). 1 kg of methane and nitrous oxide can trap as much heat as 25kg and 298kg of carbon dioxide respectively – that’s how potent they are.

Given that there are so many AFOs nowadays, the combined greenhouse gas emissions are astronomical. In events of high rainfall or flooding, the contents of the lagoon can overflow and pollute the environment. The two main concerns are the spread of antibiotic resistant bacteria and eutrophication. I shall stop here before I turn this into an essay, but bear this in mind – what I’ve just said is the tip of the iceberg.

Energy wise, eating meat is not a very efficient method. According to the ecological pyramid, only 10% of the energy is transferred from one tropic level to the next. This means that a cow would only receive 10 units of energy from a plant with 100 units of energy; a human would then only receive 1 unit of energy from that plant, should they eat the cow. However, they would be able to receive 10 units of energy if they eat the plant directly. This makes eating meat more energetically inefficient than eating plants. Given that mechanization has replaced much manpower in the crop and meat production, we are also wasting the resources used to produce the meat itself.

As we can see, while delicious, meat may not be the greenest food. However, crops are not all that good either. There are flaws in the way farmers are farming, which causes problems like loss of topsoil and leaching of nutrients. However, we can’t live without food! If we want to both survive and stay green, eating vegetables seems like the lesser of two evils. If you are indeed concerned about the environment, I would recommend you going vegetarian. Start small! One meal a week, followed by 1 day a week, then 2 days a week and so on.

At this point, you may have given up the thought of eating meat. Sorry to disappoint you, but I foresee a future where eating meat may be more common than eating vegetables. This is due to the rise of insects and lab-grown meat as alternative sources of protein. Once they become commercially viable, we may be eating them in the future! Who knows? Perhaps 10 or 20 years down the road my juniors will be critiquing my post for advocating the consumption of vegetables (especially broccoli L). 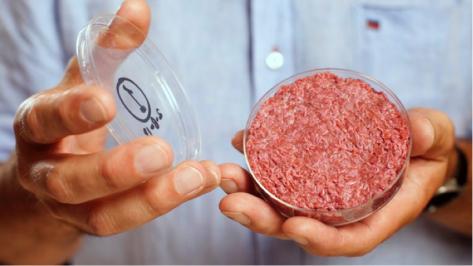 That’s all from me for now. Personally, reading up on this topic has made me more conscious of eating as much meat as I did.