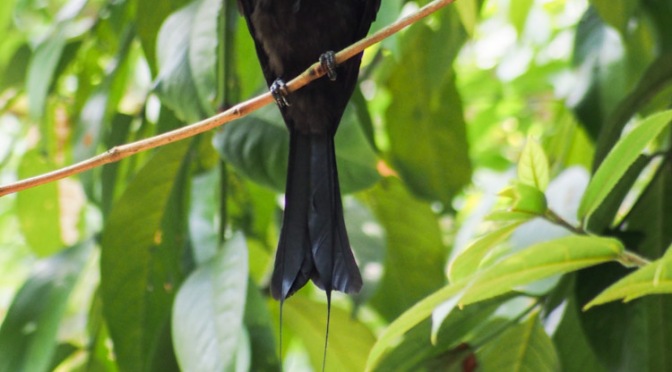 Hello everyone! The BES Drongos recently conducted our last training walk before the official opening for public trail walks.

Look at all the ready faces!

As with every walk, we see different things and it’s part of the reason why these walks are exciting because you never know what you will see! Animals aren’t stationary, like many of us who constantly check the fridge for something to eat. They are in constant motion and we cannot guarantee that you will definitely see an animal during our walks. They could be sleeping, feeding, hunting for prey… at any point in time as you’re walking along the Petai Trail boardwalk, which is a singular route that you can take along the edge of the forest that will minimise your disturbance to the quiet nature reserve.

However, the wonders of reading mean that even if you could not spot them on our walks, you can read all about what it’s like to experience them here! This post is on Variable Animals, animals that you might see along the walks – but have unpredictable behaviour and roam all over the nature reserve, unlike plants which are stationary and usually can be found in the same place from one week to the next.

This is our namesake bird, the Greater Racket-tailed Drongo (Dicrurus paradiseus). These birds are common in forested areas and have two distinctive elongated tail feather bare shafts. When they are in flight, it looks like they’re being chased by a pair of carpenter bees!

We call ourselves the Drongos because these birds, like us, are both noisy and clever. They can not only mimic calls of other birds very well, they also use this unique ability to steal food from other creatures. How do they do so? Well, they can use alarm cries known to, perhaps, pigeons to scare them away, stealing what food they have left behind. Scheming, aren’t they? This looting behavior is known as kleptoparasitism.

This video below shows how a clever fork-tailed Drongo, not the same species as the ones found here, steal food from a group of Meerkats!

This is not the only interesting foraging behavior they show. They have also been seen following in the trails of troops of monkeys to eat the insects that these monkeys stir up in their wake. In fact, our slogan, “Follow that monkey” is inspired by this sneaky behavior. 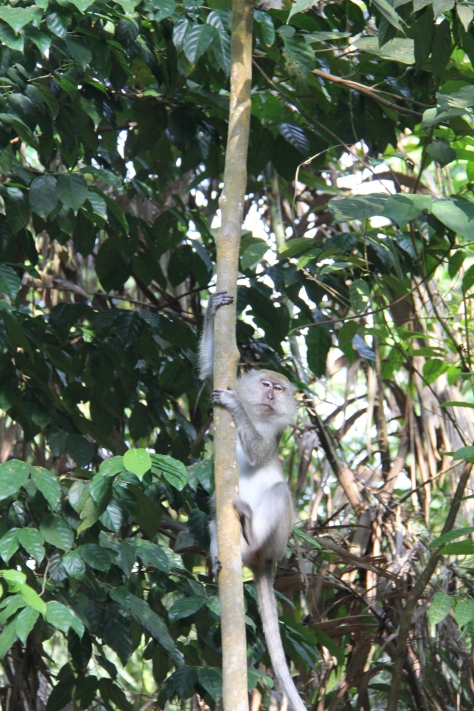 The Long-tailed Macaque (Macaca fascicularis) is another animal that practices Kleptoparasitism and more often than not, they steal from us! I’m sure everyone has been warned of the practice not to bring along food or plastic bags on the trail (if you have not, please read our Essential Information page for trail etiquette pointers). This is because the BES Drongos, along with people who live close to the habitats of the macaques in Singapore as well as those who frequent these places, have observed the macaques’ behaviour of having their belongings snatched away by these fleet-footed creatures.

These Old World monkeys are intelligent – they have even learned to use rocks as tools to crack open the shells of crabs to eat them! This gives rise to their other common name, the crab-eating macaque. Why crabs? These macaques originally thrived in the mangroves of Singapore where crabs are a common food source. Gradually, their populations have spilled into more forested settings, like the Central Catchment Nature Reserve.

Macaques are also a species that like to roam around the edge of their habitat. Since Singapore’s forest cover has diminished over the years, these macaques have increasingly smaller areas to forage for food, and thus, they turn to urban areas. Many people, at the sight of an adorable-looking wild animal, reach for food to feed it. However, by regularly feeding these macaques, they have learnt to associate humans with food. Some of them have abandoned their usual foraging behaviours because humans subsidise them with food! The food you give them are not in their regular diet and might make them sick. So, the next time you are faced with a macaque, please keep your distance and refrain from feeding it!

This huge turtle you see here is the Asian Softshell Turtle (Amyda cartilaginea). This particular creature is fondly referred to as the “Mother-ship” by the BES Drongos. Why? As it is observed that wherever it goes, a trail of Red-eared Sliders (Trachemys scripta elegans) seem to follow. It brings to mind a giant Mother-ship spaceship with the smaller spacecrafts swerving behind. DA DA DADADADAAAAADA DA…

Well, moving on…like the Red-eared Sliders, this species is not native to Singapore. It could have been brought over to Singapore to be boiled for soup. Yikes! Furthermore, since they are considered a delicacy in many Asian countries, their populations have been dropping. In fact, it is classified as Vulnerable under the IUCN (International Union for Conservation of Nature) Red List. So, the next time you are at a Chinese restaurant, maybe you can order lotus root soup instead of turtle soup.

Lastly, this Common Sun Skink (Eutropis multifasciatus) is another cold-blooded creature you can often see basking under the sunlight along the boardwalk. As you can observe from this photo, they have a glossy, somewhat angular body with smaller legs. This feature, along with the fact that they have no pronounced neck, helps differentiate them from true lizards (Family: Lacertidae). They are also remarkably pretty under the morning sun with glints of auburn and bronze gleaming off their scales.

Like the “lizards” we find at home, or rather more accurately Geckos (Family: Gekkonidae), these skinks are known to practice Autotomy. Doesn’t sound familiar? Well, word comes from the Greek words “auto-“ meaning self- and “tome” meaning severing. I’m sure, all of you have seen, at one point or another, a clever gecko escaping leaving its wiggling tail behind to distract its predator. The Common Sun Skink is also known to exhibit this behavior but it doesn’t grow back perfectly. So, don’t go trying any experiments!

Well, as a familiar bunny goes, That’s all folks! I hope you have enjoyed reading about the interesting animals you can see along our trail. With the start of the Opening Walks, hopefully some of you guys will actually get to see some of these critters.

We are fully subscribed for this season but do come and join us for our next upcoming season in January. We look forward to see you then!