It’s Save a Spider Day! OK, I know you’re about to click away because spiders are, well, look at them. If you haven’t gazed deep into a spider’s multiple eyes and shuddered, then you’re just a big, hairy, leggy, liar. But if you think about it, like really think about it, you’d probably still choose to live in a world with spiders in it, rather than without. I mean, I doubt Baygone would be a good enough substitute for a worldwide population of diverse spiders deviously conspiring 24/7 to eliminate their next insect. Do you like birds? Well, good, because birds love spiders. (As food.) Do you like diseases? No? Then thank your lucky stars, because spider venom will soon be used to treat a variety of diseases that cause muscular dystrophy. By the way, can YOU pull the natural world’s strongest material out of your butt? No? Then please, take a seat. (If yes, call 995.)

Hey, check out this fancy boy over here.

Fashion week has nothing on this male peacock spider. When it’s time to find a lady, the male peacock spiders show off their brightly coloured backs and sweet moves. Peacock spiders are tiny, with the largest species measuring a whopping 5mm. Imagine that, a tiny colourful speck waving its arms at you because that’s the sexy thing to do. Also, the females eat the males who don’t dance well enough, but let’s not dwell on that.

This spectacular shot by local wildlife photographer Nicky Bay does great justice to the silvery markings on the mirror spider’s abdomen. When the spider is at rest, the silvery shapes on its abdomen visibly enlarge. It almost looks like a piece of stained glass art!

Net casting spiders are metal as it gets. They weave webs that resemble fishnets, which they then launch at their prey to capture them. 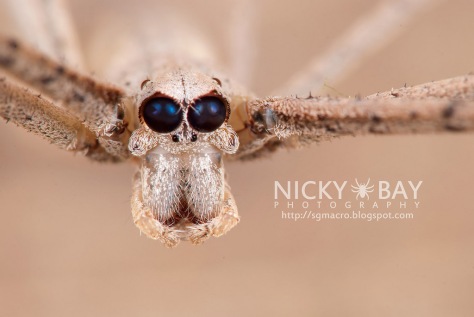 Look at those eyes. They’re not messing around.

Next time you see a spider, maybe think twice before screaming and squashing it (you can still scream, though). First of all, it cannot be denied that spiders are way cooler than us and also do us a huge favour by catching insects. Second of all, I don’t think you’d want to make an enemy of a spider at this point.