On 21st September 2019, Singapore had her first ever climate rally. For some, this event was a monumental occasion – they had hopes that it will be the catalyst for greater climate action from the government.

If you were unable to attend the SG Climate Rally, here is a detailed account of my experience!

When my friend and I reached Hong Lim Park at about 3.30pm, I was pleasantly surprised to see a tremendous turnout. The registration queue was long but also really quick as the smiling volunteers were hard at work in managing the crowd. Immediately as we entered the park, you could not only feel the blazing heat, but a fiery atmosphere full of passion and excitement to match!

As the main event was slated to start at 4.45pm, we had plenty of time to explore the ‘booths’ (or Welcome Activities) and meet people. The “What on Earth is the Climate Crisis” booth was situated near the entrance, so this was the first activity we went to. Here, we could listen to the volunteers giving a crash course on the climate crisis (and related concepts) while also providing a safe space to discuss and ask questions about the whole topic! It was nice to see people openly talk about a wide variety of issues and their specific interests like geoengineering or environmental justice. Additionally, there was a quiz that you can attempt to test your knowledge on climate change 😛 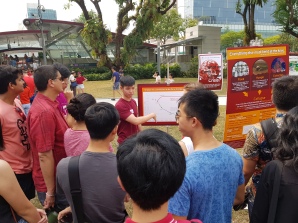 The next booth which caught my eye was the Community Mural Painting; throughout the event, it was constantly being swarmed by people waiting to write or draw messages to express their thoughts and feelings towards the climate crisis! In fact, the volunteers had to roll out an extra banner just to accommodate more people. 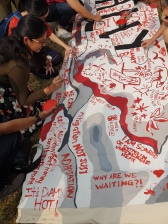 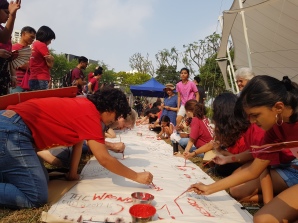 Next, we headed to “A Postcard to My MP”. As the name suggests, the booth provided us with postcards, stamps and addresses for us to mail a letter to our MPs! Beyond expressing our concerns for the climate crisis to the government, this activity was also an introspective one for me. It really got me thinking about climate-related issues and what I personally hope an individual with power can and should do. Do I describe my fears and anxiety for the future and hope that their humanity understands mine? Or should I expect more from the ministers and demand something to be done, since it is a crisis after all? I found myself reflecting a lot about my role in environmental advocacy and what I should do as someone who wants to pursue this as a career – because of this, “A Postcard to My MP” was my favourite activity! 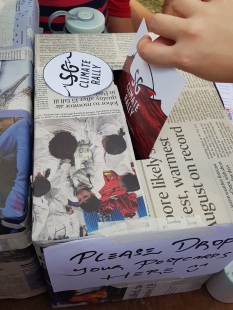 By the end of the activity, my friend and I were parched and proceeded to the water station to refill our bottles.

BES Drongos guides Hoyan and Lydia volunteering for the event!

On the way, we saw many interesting signs that were quite well thought out! Some were also hilarious and uniquely Singaporean like “Respect Your Mother” and “O-Levels are soon, so is this irreversible climate crisis”. Here are some of my favourites but do check @SGClimateRally on Instagram for more!

Unfortunately, we missed other activities like “Share Your Climate Crisis Story” and “Kids Read for Our Future” as it was already time for the main event – the speeches and the die-in.

The speeches were all pretty neat. Each speaker had their own unique perspective (from an 11-year-old boy to an NGO’s co-founder) with their own take on the issue at hand. At the same time, there was a connecting theme between each speech – the weariness of being told about individual action which translates to the demand of the government and industries to take major action. I highly recommend anyone interested to visit The Online Citizen and watch the recorded speeches! Notably, I admire Oliver’s passion at such a young age and Karen’s wholesome honesty about her fears in speaking out to the government.

It makes no sense to me that we are told to switch off our lights when not in use, but the lights in Jurong Island never seem to be switched off – Ho Xiang Tian

Honestly, I was quite skeptical about the whole “die-in” spectacle and felt that it was going to be an awkwardly uncomfortable experience. The idea was to have us “collapse domino-style” as a show of solidarity to everything we have lost to the climate crisis; thereafter, we can extend our reach to neighbouring attendees as a symbol of the interconnectedness between all things. Even as I type it now, the concept still seems quite peculiar to me!

Alas, perhaps it was because of the impassioned speeches right before, or perhaps it was because of the activity lead who was listing off all the elements of the 6th mass extinction, but the actual die-in felt surprisingly poignant. Despite whatever feelings you have for this segment of the event, I think that it made the rally a whole lot more memorable. Just like the annual Pink Dot, the die-in was SG Climate Rally’s big spectacle that had involved all attendees and meant something profound.

I personally found Singapore’s first Climate Rally to be a huge success! The organisers definitely didn’t bite off more than they can chew and everything seemed to have gone quite smoothly. Despite the heat and haze, it was also refreshing to see people still so energetic about wanting more to be done. While I believe that such rallies will still be needed in the near future, it was amazing to see Singapore’s environment-based civil society come together to demand better.