Recently, I’ve seen Facebook posts about the Cross Island Line on my newsfeed posted by those outside of my usual echo chamber of environmentally-conscious, nature-loving friends. The Cross Island Line debacle has finally surfaced into mainstream public consciousness. People are talking about the impacts of building an MRT line through a forest our city in a garden. This comes almost two years after it was first announced as part of the 2013 Population White Paper, which led to lively but unsustained conversations about it. A petition started by a concerned individual began to garner signatures. It was discussed at the Singapore Future Sustainability Symposium. Nature groups conducting walks in Macritchie Forest drew attention to the matter by incorporating it in their guide notes. An alternate route was proposed by Nature Society Singapore in a position paper submitted to the government.

What’s changed now? The debate has grown to include interwoven perspectives about our (under)valued biodiversity and natural heritage, treasures for the next generation, benefits of connectivity, difficult questions about development versus preservation, fissured environmental laws, and lessons in stakeholder engagement.

This is in response to the newly-released environmental impact assessment (EIA) report solely on the environmental baseline and soil investigation works that are required for future construction of the line. Notably, this is the first phase of the EIA, upstream of a future study that will assess the construction and operation of the underground train tunnels.

This EIA report has over 1,000 pages and 7 chapters, and is available for viewing at LTA by appointment only. There are no digital copies, making details about the EIA vaguely translated at best – a defensive move given the lack of legal requirement for EIAs to even be produced, much less open to public scrutiny. Information here on the EIA have been personally noted, and I take responsibility for any inaccuracies. [Update 19/2/2016: The LTA has now released the EIA online in full for public viewing here, a move made after the lack of transparency was raised in a letter to the Straits Times.]

The time is ripe for a decision by LTA to select one of two viable options proposed in the report:

Option 2 (Blue): 9km route skirts around it Macritchie/CCNR from the southeast of SICC, beneath to Lornie Road and parallel to the PIE 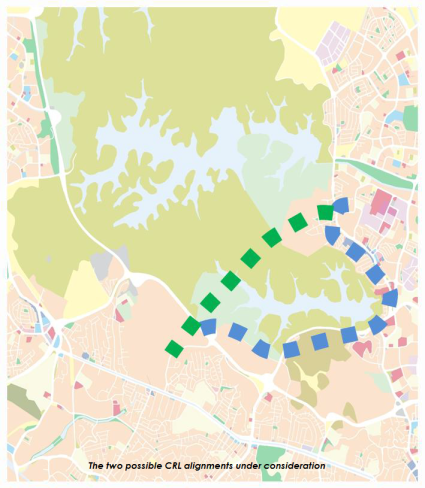 The engineering feasibility of the Cross Island Line likely depends on soil investigation works to map out the geology of the area for both options. For Option 1, the train tunnel ought to go through Bukit Timah Granite for structural stability, and this is the reason why 16 boreholes (instead of 72 originally planned) will be drilled 50-70m underground for analysis.

Option 1 presents particular concerns. Even though a rather robust Environmental Mitigation and Monitoring Programme has been recommended to reduce almost all impacts to acceptable levels of minor to moderate or negligible, there still remains the possibility of accidental events . Uncontrolled site runoff, spills from construction fluids, roadkill and damage to vegetation from vehicle movement could all occur – the likelihood of which could fluctuate based on how well measures are observed.

The language of the EIA has diffused into media reports, with words like impact receiving attention. Translated from the Impact Significance Matrix, impact is a composite of sensitivity/vulnerability/importance of receptor/response and magnitude of impact (with factors of extent, duration, scale and frequency). Typically, we want to minimise impact to minor or negligible, especially if they are in highly sensitive areas such as areas directly within the reserve. The type and likelihood of impact is also important. The phrase “as low as reasonably practicable”, stylised as ALARP, is also mentioned as a caveat to the limits of engineering ingenuity, standards, protocols and emergency action plans to reduce these impacts. 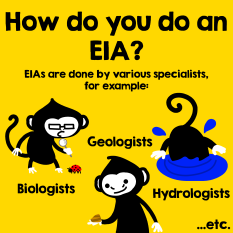 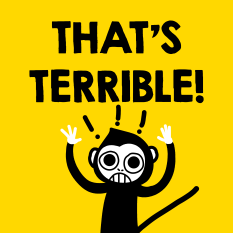 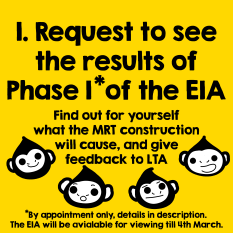 The construction of a Cross Island Line is one that has particular pressure points which lie outside the scope of the EIA report:

A concerted move by environmental groups to push for a “zero-impact policy as a starting point to avoid long-lasting impacts on the environment” is making itself visible and vocal on social media platforms, garnering support from the masses with each share and like. The Love Our Macritchie Forest movement, fronted by the Toddycats, the BES Drongos, and the Herpetological Society of Singapore, is putting pedal to the metal – or in this case, boots on the ground.

March for Macritchie is a series of guided tours in March initiated by Love Our Macritchie Forest that the general public can sign up for – and decide for themselves the values that they place on biodiversity intrinsically, as educational tools, or for wonder to be experienced by themselves or their children.

“You can’t miss what you don’t know.”

This slogan captures precisely the motivations for me to be part of the Love Macritchie movement. You can’t miss what you don’t know about the local biodiversity housed in our forests – a part of our terrestrial environment that still remains audaciously non-urbanised. And you won’t miss it until it’s gone. (Pictured here are some of the animals found in Macritchie.)

Such is the impassioned, heartfelt plea from environmentalists such as myself to not only minimise the impact of the Cross Island Line, but to reduce the impact to zero. This is not unachievable, given the fact that there is after all, literally another option on the table present as a thinner (and hence detailing fewer impacts) bound report: the alternate Lornie Road route, Option 2.

EDIT: The EIA has now been made available for viewing online here!

One thought on “The Story of Saving Macritchie So Far”