The Lee Kong Chian Natural History Museum is always a wondrous place to visit. A typical museum can seem rather boring, what with things and people that have negligible relevance to one’s present day life. It is hard to say the same, however, of the LKCNHM, which has on display three towering dinosaur skeletons that inevitably humbles oneself, not to mention a wide array of curious creatures one would otherwise have no luck or guts to witness alive. The “Air Tenang: Tale of a Giant Crocodile” exhibit is one such example.

Translated from Bahasa Melayu, “Air Tenang” means “calm water”. At first glance, one might think that this is a reference to a crocodile’s sinister ability to create the illusion of calm waters before sniping their prey in a split horrific second. Many artefacts on display help bring that visual imagery to life, including a 3-footed crocodile skull that belonged to one of the largest crocodiles in history, projected to be more than six metres long. The stuffed carcass of Kaiser, an expired resident of the Singapore Zoo, is surrounded by an abundant spill of red, blue and white fabric previously used to taxidermise him. 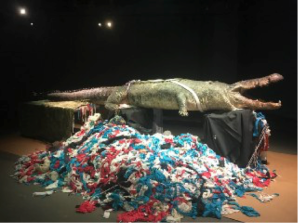 Somehow, even without their essence, the skeletal and hollow remnants of these creatures still manage to invoke some sort of primal fear in us. It is thus hard to imagine that a human being can approach a live, wild crocodile without consternation and the instinctive need to either run or defend. Perhaps, then, crocodile farmers, hunters, and the likes of Steve Irwin may be seen as heroes that have faced the wild.

The problem arises when we let this fear get the better of us.

Herpetophobia is the fear of reptiles, and it is also commonly associated with ophidiophobia, the fear of snakes. About one third of adult humans are ophidiophobic/herpetophobic, making it one of the most commonly reported phobias in the world.

There are many theorized reasons for herpetophobia, and you might be surprised to know that there may actually be a very practical reason for it. According to evolutionary biologists, reptiles were already around when the first mammals evolved 100 million years ago, while other threats such as birds and other mammals evolved long after. The sheer number of venomous reptiles that were co-evolving with us created an evolutionary arms race, and our primate ancestors’ main defence mechanism was our increasingly sophisticated eye for sensing colour, detail and movement. Being able to spot reptiles and having an instinctive fear trigger thus became a valuable survival asset to primates, and subsequently, to us humans.

This would reasonably explain the disproportionately large percentage of people fearing reptiles much more compared to other animals we might encounter on a day-to-day basis, or other equally fearful predatory animals such as lions and tigers. A National Geographic study conducted on babies also showed that this fear is highly intrinsic; their pupils dilate when shown pictures of snakes and spiders in contrast with flowers and fish, wherein pupil size is directly correlated with a variety of mental and emotional stresses.

Yet, any kind of phobia is classified as a mental disorder; an irrational fear that goes beyond protecting oneself from danger. Fear developed for a purely evolutionary purpose can therefore only go so far as to explain such a prevalent phobia.

We often overlook the subliminal effect media and culture have on our psyches. Throughout history, reptilians have been vilified. From the biblical snake in the Garden of Eden to the mythical dragon (which is merely a form of extrapolation of reptilian traits), reptiles are most commonly portrayed as symbols of evil and cunning. In language, reptilian terms like “cold-blooded” are unmistakable insults and the modern lingo “snake” has recently evolved to mean “backstabber”. Anthropomorphic reptiles in popular films and fiction novels are conveniently made the villain across age groups and genres.

“Never Smile At a Crocodile” in Disney’s Peter Pan

♫ Never smile at a crocodile
No, you can’t get friendly with a crocodile
Don’t be taken in by his welcome grin
He’s imagining how well you’d fit within his skin ♫

(From left to right: Godzilla, Randall from Monsters Inc., Basilisk from Harry Potter, underground lizard people from Dr Who, and Kaa from Jungle Book, all playing antagonistic roles.)

Even in the news, cases of crocodile attacks are highly sensationalized as a form of public warning, and they are often the inspiration for thriller movies featuring killer crocs.

Most popular movies involving crocodiles are thriller and horror movies, revealing societal attitudes towards this animal.

For most, these cultural references will be the only interactions one will have with crocodiles and other reptilians. Contrast these with other apex predators like lions or most other mammals that by default assume the protagonist role or are alluded to courage or leadership. It is no wonder that we fear reptiles irrationally.

The question is, does it really matter how we see or portray reptiles? In short, it does. Our current understanding of extinction risks of reptiles is the shallowest as compared to birds, mammals, amphibians and other animals; only 45% of reptile species have been assessed by the IUCN to date. Mankind’s disinclination towards reptiles has created a bias of conservation efforts toward anthropocentric views rather than ecological value or urgency. Even if one might argue that scientific or conservational pursuits should remain objective and unbiased towards these species, experts agree that social and cultural support are vital to approaching conservation holistically. This is dangerous, considering that many reptiles such as crocodiles are apex predators and indicators of health in freshwater and estuarine ecosystems. Being typically opportunistic eaters, they control the population of a variety of prey, and their carcasses are a significant food source for smaller animals.

Here is the hard truth about crocodiles. They have no aversion to the taste of human flesh, are extremely protective and territorial parents and will actively hunt people as a food source. About 1000 people are killed by crocodilians each year, with majority of attacks recorded being in Southeast Asia and Australia. They are consistently high rankers on any site’s “Top 10 most Dangerous Animals” list.

But here is the hard truth about humans. Over 56 billion animals are killed every year for food, and more than 50 million are killed for their pelts for fashion. Crocodiles are no exception to the wrath of humans; visit the exhibition and you will witness old photographs of crocodile farms used to harvest skin and meat, not to mention crocodile duels for pure entertainment. We are, no doubt, the Top Dangerous Animal since we evolved on this earth to be feared more than any Godzilla there is out there.

Fear is purposeful, but we need to understand its origins to make full and proper use of it. Can we still maintain that our fear of crocodiles purely stem from the instinctive need to conquer our evolutionary enemies, at the “cold-blooded” detriment of our ecosystem? Does our fear justify the lack of conservation value we place on these creatures? To triumph our fear is not necessarily to confront a crocodile head-on like Irwin does, but to be able to detach ourselves from our primal biases and confront the complexity and ambivalence of the crocodile-human conflict.

Crocodiles are a hardy species, one of the most ancient and unchanged creatures of natural history from 240 million years ago. They have survived continental breakups and ice ages, seen the rise and fall of dinosaurs and the evolution of mammals and birds. To date, no species has yet to be extinct, but since the human epoch, 44% of crocodiles are threatened, and 17 out of 23 species are endangered.

The “Air Tenang: Tale of the Crocodile” exhibit informs us that presently, crocodiles are contained mostly in wetland reserves like Sungei Buloh, barricaded away from human-frequented waters. There have been no attacks since 1989 since they were hunted to near local extinction during colonisation, and the Singapore Red Data Book (2008) classifies the Saltwater Crocodile as “Critically Endangered”. Perhaps, “Air Tenang” can be more aptly interpreted as the truly unearthly silence of the waters in light of the absence of crocodiles in our waters today.

Are We Born Fearing Spiders and Snakes? (2017, October 26). Retrieved from https://news.nationalgeographic.com/2017/10/infant-fear-phobia-science-snakes-video-spd/

Ceríaco, Luis MP (2012). “Human attitudes towards herpetofauna: The influence of folklore and negative values on the conservation of amphibians and reptiles in Portugal”. Journal of Ethnobiology and Ethnomedicine. 8 (1): 8.

Fritscher, L. (n.d.). Do I Have Herpetophobia or Am I Just Afraid of Snakes and Lizards? Retrieved from https://www.verywellmind.com/herpetophobia-2671862

Gresh, Lois H.; Weinberg, Robert (21 April 2008). “Why Did It Have To Be Snakes: From Science to the Supernatural, The Many Mysteries of Indiana Jones”. John Wiley & Sons.

Never Smile at a Crocodile. (n.d.). Retrieved from https://tvtropes.org/pmwiki/pmwiki.php/Main/NeverSmileAtACrocodile

Of snakes and faces: An evolutionary perspective on the psychology of fear”. Scandinavian Journal of Psychology. Wiley. 50 (6): 543–552.

Respax. (2017, August 17). Whitsunday Wildlife Tour – About the Crocodiles in Whitsundays. Retrieved from http://crocodilesafari.com.au/about-crocodiles/